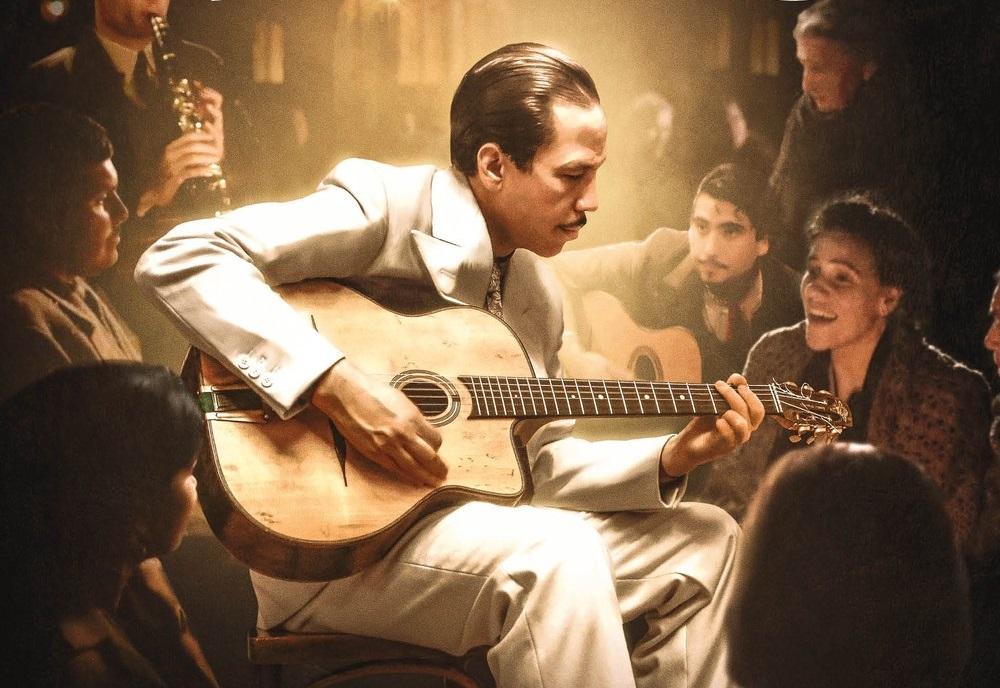 The final date of our ‘Music & Movies: The Connection’ festival, Enchanted Cinema in collaboration with repmusic presents Django, the story of Django Reinhardt, famous guitarist and composer and his flight from German-occupied Paris in 1943.
Reinhardt, elegantly interpreted by Reda Kateb (A Prophet, Zero Dark Thirty), is the toast of 1943 Paris, thrilling audiences with his distinctive brand of “hot jazz” and charming his admirers including his muse played by Cécile de France (Hereafter, Chinese Puzzle).  But even as the rise of Nazism forces Reinhardt — whose music is considered degenerate under the Third Reich — to make a daring escape from Paris, he refuses to be silenced as his music becomes a form of protest.  Reda Kateb’s performance is simply impressive and will certainly please all fans of Django.  A spirited biopic that will keep audiences on their tapping toes.
“Django” will leave fans of the legend merely eager to return to their beloved recordings and let their ears take in the greatness.” – LA Times
repmusic prides itself of providing the highest level of live music performance, in London and across East Anglia. Offering music from a number of genres, but specialising in jazz, swing, and pop, we’re delighted to have worked together to put together this exciting festival of Music & Movies, where repmusic has specifically chosen acts or performances that represent the music featured in our festival programme. At each event a repmusic ensemble will perform an extended programme to get our audiences in the perfect mood and mindset for the movie to follow.
Django Reinhardt was almost solely responsible for the meteoric rise of the gypsy jazz scene around the globe, so Repmusic has chosen Django’s Tigers gypsy jazz band to perform ahead of the movie Django, another of our gigs that will be fantastic for dancing.
Accompanying the music will be food legends, Azahar, who will be serving you a taste of Spanish street food such as bocatas, chorizo burgers and authentic paella. We also have our brand new bar where BrewBoard will be serving their stunning craft beer, so keep your picnics at home!
Enchanted Cinema is back for its 5th-year of inner-city cinematic magic. They return this year to one of their favourite venues, The Gonville Hotel’s magical gardens, in the centre of our beautiful city.
These guys are all about creating an original and vibrant cinema scene that offers an exciting way to watch a great film. Expect to be wowed by a short film before each screening, magical light installations and live music from local artists. These events are set to be the most magical of the summer.
Team EC has brought together some of the best street food vendors in Cambridge who will be serving up delicious food for Enchanted Cinema ticket holders and there will be an out-door bar and popcorn kiosk along with live music from local musicians until the screening which will begin at sunset for each film.
Seating is not allocated so be sure to arrive in advance to choose your deckchair. We are a rain or shine event so if the Great British weather surprises us and the skies open, we will have waterproof ponchos available and the show will go on!
Sit back in a deckchair, fresh popcorn and a drink in hand, and experience cinema as you never have before this summer…